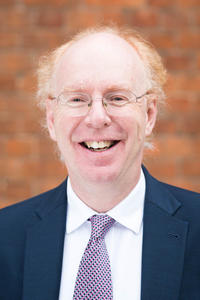 Ian joined Wycliffe as Bursar early in 2020.  In a more than 25 year career in the City, Ian had senior strategy and operational roles in a number of leading financial services and consulting firms such as Threadneedle and Accenture.  On leaving the City, Ian transferred his experience to the Church of England becoming Head of Resources at Ministry Division from 2015 to 2018 where he was responsible for the implementation of a new framework for financing ordinand training.  More recently Ian has indulged his interest in English Literature by completing the Foundation Certificate at Oxford University.

Ian is married to Nicky with two grown up daughters and enjoys reading, theatre especially the Edinburgh fringe and has been known to run half marathons. Having lived in France while studying an MBA he is also somewhat knowledgeable about their wines and cheeses, which is why the half marathon running needs to continue.