Most Wycliffe students wishing to participate in Oxford 'cuppers' tournaments do so (by virtue of our 'special relationship') via one of the Queen's College clubs.  For the noble sport of croquet however, so popular on all the best parsonage lawns across the world, it becomes a clerical training establishment to field teams in its own name.  In both the 2018 and 2019 seasons Wycliffe has entered three teams of four players, consisting of a wide mix of home and international, male and female, ordinand and independent members.  The first team, consisting of Aron Donaldson, Edward Keene, Tim Lee, and NT tutor Peter Head met with some measure of success this year, reaching the quarter-finals and thus the 'last 8' of an initial 400 teams which entered the lists in April.  Teams from Pembroke, Keble, Christ Church, New, and even Queens itself were beaten in the knock-out system, before finally we were felled by the overall winners of last year's Cuppers, Lincoln. 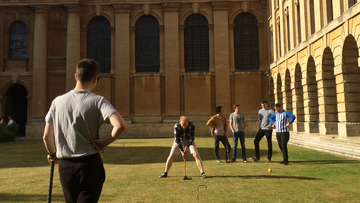